Recently, Nature Communications,  an international leading journal published the latest findings by Prof.  Li Zhen’s research group from the School of Chemistry and Molecular  Sciences, Wuhan University. This research not only delves deeper in the  internal mechanism of purely organic room temperature phosphorescence (in short of RTP) luminogens, but also realizes the practical application of such materials.

The thesis is titled The influence of the molecular packing on the room temperature phosphorescence of purely organic luminogens, with  Wuhan University being its first signature institution and Yang Jie, a  doctoral candidate its first author. Research groups led by Pu Kanyi,  associate professor of Nanyang Technological University (NTU), Li  Jianrong, professor   of Beijing University of Technology, and Peng  Qian, associate researcher of Institute of Chemistry Chinese Academy of  Sciences, also participated in this research. They respectively  conducted collaborative researches on bioimaging, crystal analysis and  theory calculations. 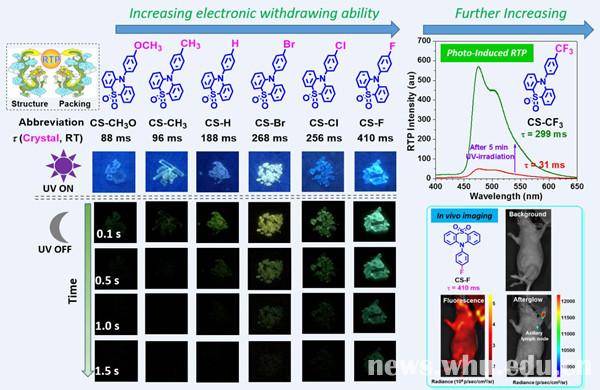 Phosphorescence  is a slow luminescence phenomenon of photoluminescence (PL), which can  persist after the phosphorescence excitation stops. At present, noble  metals contained in most RTP systems lead to a series of problems,  including high cost and potential toxicity, etc. However, the pure  organic RTP molecules were seldom reported, especially those  phosphorescence compounds with ultra-long lifetimes. It is due to the  inadequate understanding towards the mechanism of pure organic RTP.  Therefore, a reasonable theoretical guidance has not yet been in place  for instructing the design of such kind of molecules.

In  this research, a series of phenothiazine derivatives were designed and  synthesized by Li Zhen’s team. Their RTP properties were adjusted by  changing the kinds of substituent groups, achieving significant growth  in phosphorescence lifetimes from 88 ms to 410 ms. Through careful  crystal analysis and theory calculations, they found that increasing the  electron withdrawing ability of substituents enhances the  intermolecular π-π  stacking interaction of crystals, which could stabilize the excited  triplet state accompanying with the ultra long RTP effect. More  interestingly, when trifluoromethyl group serves as the substituent  group, the unusual photo-induced RTP was observed for the first time,  which has never been reported before. Finally, compounds CS-F, with its  characteristic of ultralong phosphorescence lifetime, could be utilized  for the applications in vivo phosphorescent imaging. Thus, Li’s study  paves the way for the vast development of persistent RTP materials, in  both the inherent mechanism and the practical applications.

This  paper put forward for the first time that Molecular Uniting Set  Identified Characteristic (MUSIC) is a common phenomenon, which can  vividly indicate the intermolecular condensed state interaction, just  like melodies merging into a symphony.