During November 6th to 13th, Vice President Shu Hongbing led a delegation to universities in the UK and Italy. This visit is expected to promote the exchanges and communication with such world-famous universities as Imperial College London, Durham University, the Institute Pasteur of Italy, Sapienza University of Rome and so on. During this visit, the delegation also attended the 5th anniversary celebration of Confucius Institute of University of Aberdeen as well as the election and restart ceremony of British Alumni Association of Wuhan University.

On November 6th and 7th, the delegation visited Durham University for the first time. Shu Hongbing and vice president of Durham University, Professor Patrick Hussy, signed a memorandum of understanding on cooperation and agreements on undergraduate and postgraduate exchange programs. The undergraduate exchange program will be based on five majors in Hongyi Honor college and will be eligible to  apply for International Exchange Program for Outstanding Undergraduates of China Scholarship Council. The delegation also reached consensus with research groups of School of Physics and School of Life Sciences of Durham University on the selection and mobility of doctoral students. Both sides were looking forward to establishing a comprehensive cooperation in science with master and doctorate joint education programs as the starting point. 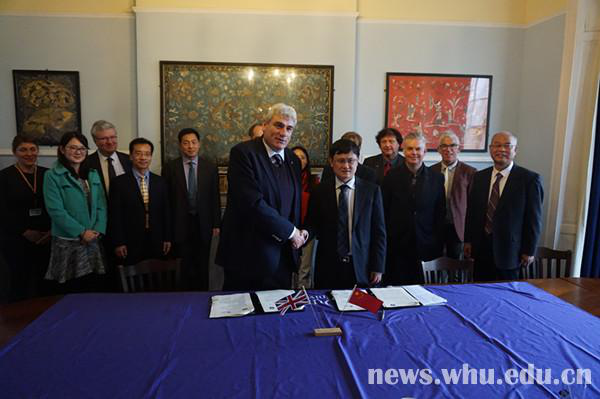 and agreements on undergraduates and postgraduates exchange program

On the same day, a working conference of the joint research institute of Wuhan University and University of Aberdeen was held. The two sides fully affirmed the rapid development of the institute in the past year, and pledged to increase investment and expand the existing cooperation in the fields of pharmacy, environmental law, computer and power machinery to the fields of medicine and life sciences, so as to achieve a strong alliance. 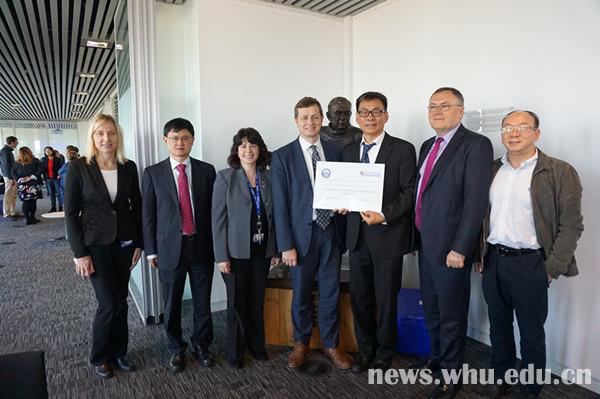 Establishment of Energy and Mechanical Engineering Research Center of

From November 9th to 10th, the delegation visited Hamlyn Centre of Imperial College London, and met with the minister counsellor at the Chinese embassy in the UK, Wang Yongli. Then they organized the election and restart ceremony of British Alumni Association of Wuhan University.

On November 11th, the delegation visited the Institute Pasteur of Italy and came to an agreement with Dr. John Hiscott, director of the institute, on joint scientific research and expressed WHU’s intention to inviting foreign experts.

On November 12th, the delegation visited Sapienza University of Rome, the largest university in Italy, and was receipted with great hospitality. Vice President Shu Hongbing and President Eugenio Gaudio signed a cooperative memorandum on joint training of Master of Sinology, a clarification the specific details of cooperation in literature, which is WHU’s advantage discipline. Meanwhile, the two parties agreed on the joint postgraduate training project in architecture, Sapienza University of Rome’s preponderant discipline that ranks among the global top. 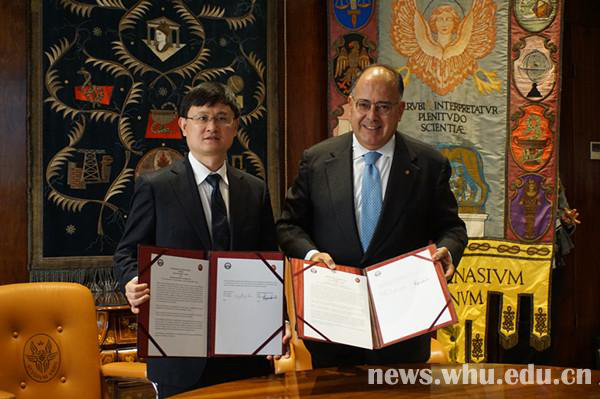 Shu Hongbing and President of the university, Professor Eugenio Gaudio

signed a cooperative memorandum on joint training of Master of Sinology

In order to further implement the initial achievements of this visit and consolidate the newly developed inter-university relations, Durham University and Sapienza University of Rome plan to send delegations to Wuhan University in March next year.