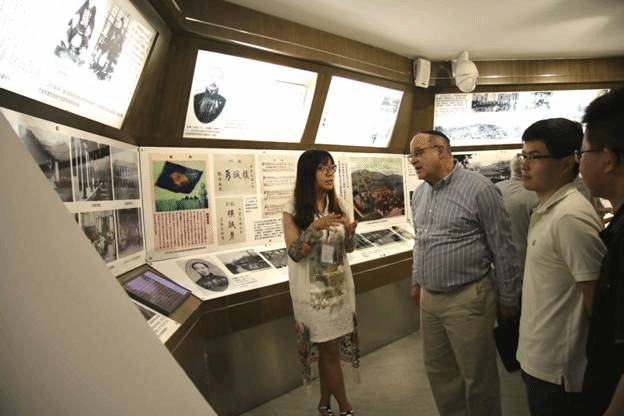 Prof. David Srolovitz was invited to speak on “Unified Theory of Interface Dynamics in Crystalline Materials” forthe 187th edition of the Luojia Lecture series. He is the author of over 450 papers and an established expert on topics such as grain boundaries, dislocations,microstructure evolution, dislocations, and film growth. He is a Member of the National Academy of Engineering, Fellow of MRS, TMS, ASM, Institute of Physics and is the winner of the 2013 MRS Materials Theory Award. He is currently the Joseph Bordogna Professor of Engineering and Applied Science and Director of the Penn Institute for Computational Science.

He expressed his delight over this opportunity to visit Wuhan University and meet some of the mathematicians he had been working with. Earlier this year, Q.Zhao, W, Jiang, W. Bao, and Prof. David J. Srolovitzpublished a paper on triple junction drag effects in the journal ActaMaterialia. He commenced his lecture with a quick introduction of crystals and its composition,”Each of the individual crystal is the form of grains. The grains meet each other at flat interfaces. Although they are made up of same material, there is a discontinuity in crystal structure.” He clarified that grain Boundaries are not Liquid Films and went on to illustrate them with details,”Each bubble can have different gas pressure inside and the liquid films can migrate. The network of bubble get closer and closer.As they get closer, the average bubble size and number of bubbles increases.”

He talked about what we know on curvature flow and grain boundaries in networks, charting out mathematical relations. In all those generalizations, he suggested that topological changes be taken into consideration and also gave the reason behind it,”As the grain shrinks, its number and size changes.” He touched down on several of the topics onBicrystallography,Lattice Dislocations, disconnections and intrinsic grain boundary dynamics.

He demonstrated properties of grain boundaries in relation to crystal structure, “If I don’t apply stress,it doesn’t move and interestingly by applying force in opposite direction, the grain boundary move in other way. That doesn’t happen in curvature flow. That has to do with crystal structure.” He added further,” If I look at all the possible shifts I can make, I end up tracing out the position of where the atoms overlap.”

Basically a crystal isa periodic arrangement of atoms and a translation vectors helps to map out the atoms. Based on his findings, he said, “From all the possibilities, we found that the system has no correlation between shear and translation”. he stated that shear coupling means stress develops and the two driving forces may cancel. In unconstrained dynamics, grain boundary migrates at constant velocity but in constrained motion grain migrates stop after some time.Shear couples with one mode and switches back and forth. Multiple coupling mode is more complicated and under applied stress, disconnections nucleate propagate to the vertices.

Before the drawing the conclusions of his lecture, he graphically demonstrated triple Junctions. He asserted that when disconnection reactions at junction are very slow, stationary, junctions don’t move and grain boundary is curved but when disconnection reactions are very fast, grain boundary is flat. In the end, he casted some light on the fact that disconnections and their dynamics are key to understanding a wide range of grain boundary dynamical phenomena and also briefly stated the challenges in crystallography. He humbly answered questions posed by attending students and professors and the lecture ended with a rapturous applause.